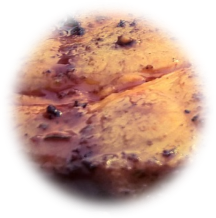 I had misgivings at the first whiff of Worcestershire Sauce. My order of Cypriot Mushrooms, as it was called, comprised overcooked fungus drowned in half a pint of the sour liquor.

During my English childhood, every pantry had a bottle of Worcestershire Sauce. The old-fashioned label suggested colonial gents in the era of the Raj, sprinkling a few drops of the brown elixir on their breakfast chops. But this brute of a dish was knocked up in a restaurant in the Troodos Mountains in Cyprus, where Mount Olympus watches over ancient Byzantine monasteries. And there was the main course still to come.

This and many other meals have helped frame my view that attitudes to national cuisines are as much to do with politics as with alimentation. Let me go back a few decades.

In the early seventies, a shop in London called Habitat started selling little kits of curry spices. You could buy the same spices in Indian and Pakistani grocers if you cared to enter such a store, but people like me – white people – didn’t. Habitat was the precursor of the cool homewares stores that are nowadays ubiquitous. It was one of the first shops to sell a lifestyle of lightness, quirkiness, ultra-modernity, pop art colours, brushed aluminium. The curry spices were emblematic of the Habitat lifestyle: Adventurous but safe, the Orient without the runs.

If I’d been a clairvoyant I’d have known that in 1978, the Palestinian-American scholar Edward Said would publish his Orientalism, in which he theorised that Europeans had invented the notion of the Orient as a means of asserting the cultural dominance of the colonisers over the colonised. I’d have considered with foresight – in 1973 – that in cooking up a Habitat Chicken Korma, I – along with people like me – was one of a new breed of colonialist. We were remodelling a cuisine using a limited range of ingredients, cooking methods and named dishes; we were turning the gastronomy of a vast and varied land into three curries: Korma, Madras and Vindaloo, with a spoonful of Sharwood’s to garnish. The depressing thing was that Habitat curry was tasteless. You’d get a much more satisfying feed at the local Paki with its maroon flocked wallpaper, Bombay Duck, and cold lager.

But the taste of culinary conquest was on my lips, and those of many of my friends: Over the decades we colonised new cuisines: South Indian, Thai, Vietnamese, Egyptian. Our spice racks were full, our veggie plots sprouted galangal and coriander. Our kids learned to use chopsticks before they enrolled in school. When we travelled we learned new variants, discovered pockets of cuisines we hadn’t conquered, rooted out new stinky delicacies to surprise our dinner guests back home.

My finest moment was, I think, in about 2002, when I cooked Indonesian food for twenty guests at my house in the Blue Mountains. Perhaps it was the big Australian reds being sloshed back that night, but I didn’t see the irony of a table of affluent Australians eating Javanese street food among the gum trees and possums.

It was also when I lived in the Blue Mountains that a critical light was shone on my immature postcolonial sensibilities. If you look at census figures for the Blue Mountains, you will discover that the area has a minuscule Asia-born population. From a culinary point of view, this was brought home to me when I found that the waiters in a local Chinese restaurant were Europeans. My first reaction was that I had been cheated; shouldn’t Chinese restaurants be staffed by Chinese people? How could the food be authentic?

And this from the white guy who had mastered – or perhaps remastered – half a dozen national cuisines ranging from the Atlas Mountains to the Yangtze River. This was the white guy who was just beginning to understand that eating is political. I hadn’t learned those Oriental cuisines; I’d invaded them, pillaged them, and brought them home as trophies.

I’ll go a little further with my postcolonial analysis, and claim that white guys like me tended to conquer the cuisines of those bits of the world that our forebears had colonised, not those of the colonisers. The acquisition of French culinary expertise is seen as difficult, and part of the learning of high culture; indeed we talk about haut cuisine. Anyone can make a curry, but French – that takes real art, n’est-ce pas?

And so I found myself in Cyprus, yet to taste Cypriot Mushrooms, travelling with a companion who had lived there as a child and still cherished sweet memories of the food. We started our journey in the southern, Greek, part of the island where, my companion told me, we’d wander the beachside food stalls in the evenings seduced by the fragrance of lamb kebabs grilling on charcoal braziers. The tender pink meat, singed at the edges, would snuggle up against yoghourt and mint in warm pocket bread.

Perhaps that was the case in her childhood. Now there was pork, lots of the stuff, white and fibrous and dry, tasting of almost nothing. And there were cappuccinos topped with aerosol cream and powdered cinnamon. It was time to go north.

We crossed the border by car and meandered through the northern part of Cyprus, enjoying delicate pastel-tinted Turkish food as well as robust tourist grub. The fourth day found us crossing back into the Greek south; we would cruise down the Troodos Range and end up at Paphos, where we were to stay with family. It was the end of the tourist season and the fragrant pine clad hillsides were still pleasantly warm. We stopped to look at exquisite little churches – squat and rough-walled, interiors painted with glorious two-dimensional depictions of saints. The roads were empty.

Our accommodation – a tiny hotel carved into rock walls – had been booked long in advance. We were the only guests, we were told in the troglodytic reception niche. And the restaurant was closed for the year. Try down the hill. They’re still open.

Taking the winding cobbled lane past shuttered windows, spilling geraniums and sleeping cats, we met a sweating couple passing us on the climb up – English, middle-aged, underdressed and red. A single scooter clattered by and was gone.

The restaurant was one of those sadly anachronistic places, a faded faux Swiss chalet, out of place, out of time.

There was. It was half a yard across, cracked and stained, the plastic coating having given up the fight against greasy fingers. There was a large ‘local specialities’ section, a small burger-and-chips list, and unexpectedly, a standard Indian selection of Korma, Vindaloo and Madras. We were the only diners.

“Does it get busy later?” my companion asked the waitress.

“Not really. It is not so full this time of year,” she replied. What was her accent? Not Greek, I thought.

“I’m famished. I’m having an entrée first,” I said to my companion.

“You might regret it. I’ll just have the fish.”

My culinary antennae were bristling: A Greek restaurant, notwithstanding the curry and burgers. Might I get something resembling honest Greek grub of the kind my companion remembered from her girlhood?

When the waitress brought me a pint of lager (“You’ll be full up before the food comes,” my companion said) I asked the young woman if she was from the village.

“How interesting,” I lied. “Is the chef from round here?”

“India, maybe.” Aha, that could explain the curries.

A little more questioning revealed that the regular Greek chef had finished for the season. The guy in the kitchen was filling in till tomorrow.

“The restaurant closes for the season.”

“What does he normally do?”

“He cleans the place. He drives the van.”

And so I found myself with two pints of lager on board, and before me a bowl of mushrooms braised in Worcestershire Sauce. It was as vile as it looked and smelt.

“You’d better eat it. You’ve got to pay for it,” my companion sniggered.

I consumed the solids.

My companion’s fish arrived – light and reasonably edible, she reported. But there was no so sign of my ‘Cypriot Meat Platter’. I had another pint of lager.

When at last the dish arrived – enough for four diners – I guessed that the ‘chef’ had cleared out all the remaining meat in the freezer, laid it out on a zinc slab – lamb chops, pork cutlets, cowboy steaks, sausages – and run a blowtorch up and down the row.

I miserably picked at the charred edges of something.

“Serves you right. Why don’t you send it back and ask for something else?” Did I detect the mildest hint of schadenfreude?

Later I said, “Next time we’ll find a Greek restaurant with a Greek chef.”

“You know that’s nonsense. Half the Italian restaurants in Sydney are run by Anglos, not Italians.”

She was right of course.

“Why don’t we just find a restaurant with a chef?” I said.

This is an edited version of a story I first published in 2016 under the title Diners of the World Unite!

Drop in here to find out about my novels.