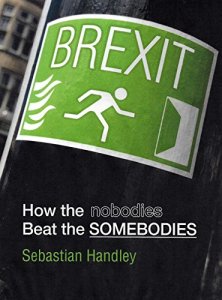 Brexit. How the hell did it happen? OK, I confess that if I had been allowed to vote in the land of my birth, I would have voted Remain. But Sebastian Handley’s Brexit: How the Nobodies beat the Somebodies gave me a long pause for quite a lot of thought. He wouldn’t have persuaded me to vote Leave, but his book gives a rare opportunity for insight into the thinking of a committed Brexit campaigner, and is a valuable corrective to the ‘them vs us’ smear that characterised a lot of the so-called debate around Brexit. Handley’s book is highly original, and as such difficult to categorise: Memoir? Handbook for revolutionaries? Political manifesto? Structurally, it’s couched as a breathless series of diary entries. Stylistically, it’s Spike Milligan meets The Young Ones (influences Handley acknowledges at the beginning of the book). The narrative voice is somewhere on a cline from faux-naif to skilled orator. There’s also a love story woven into the gaps between Handley’s indefatigable campaigning for Leave in Brighton. And in the end, Handley answers the question How the hell did it happen? Through quintessentially British amateurism, with small squads of loosely connected enthusiasts bashing out leaflets and learning how to dodge the slow-moving ideological missiles of the Remainers. If like me, you’re still baffled by the Brexit vote, this is essential reading. If you’re a Leaver, read How the Nobodies beat the Somebodies, and have a well-deserved gloat!