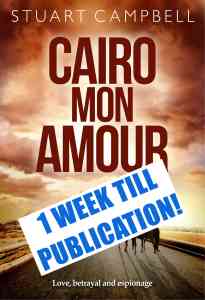 The fourth and final part of Cairo Mon Amour is called Exile, and includes two long chapters when I send Pierre and Zouzou to London, and Lucy and Bellamy to Moscow. I thought that recreating 1970s London would be easy – after all, I was there. But there were some tricky challenges.

There’s a mystique about seventies London. People younger than me have said they envy the fact that I was there. Well, they wouldn’t have envied the ratty bedsits where I lived, and they’d be shocked at the lack of money, the strikes, and the IRA bombs. They’d be puzzled by the primitive technologies and by living in a pre-silicon chip world. On the other hand, I think they’d be astounded at the intellectual freedom of the time.

I had two distinct challenges: One was to make a seventies London that would resonate with the natives – readers who had been there, and at the same time that would convince the tourists – those born after about 1970 who missed it.

For the natives, small tokens will evoke the era: Green Shield stamps, pressing button B in a phone box, the Benny Hill Show. But I felt I had to work a bit harder for the tourists. How many thirty-year-olds know what a trading stamp is? Can they imagine a city with no ATMs?

And this is where the second challenge comes in: How much detail? How can the writer prevent making the text a cluttered museum to the seventies? Somehow, I had to sketch the background to the seventies, leaving the foreground free for the drama.

The public phone box was one of my favourite strategies. The technology gives an instant distinctive edge to seventies life. Phones had wires. There were no answering machines. You could get ‘stood up’ (a rare phrase these days) because your date couldn’t call you on the mobile to say they were delayed. London phone boxes had a special smell -stale fag smoke, old piss, and damp cement. They had little glass windows that steamed up and invited itchy fingers to write initials or draw hearts or penises. They were often adorned by little cards coyly advertising prostitutes.

One evening, my exiled Armenian-Egyptian private eye finds a card on his door. It’s from his hard-boiled landlady and she’s reminding him not to over-use the shared bathroom. Later he’s in a phone box. ‘Call Rita for French polishing’ says the square of cardboard stuck to the window.

This is Pierre’s seventies London: a ‘city of little cards’.