The Pierre Farag Espionage Thriller series is now a trilogy. Book 1 Ash on the Tongue is free to download here. Book 2 Cairo Mon Amour is published here, and Book 3 Bury me in Valletta will be published in early 2020.

If I were name my favourite character in the trilogy, the prize would go to  femme fatale Zouzou Paris. Here’s how to create your own Zouzou:

Give her a mysterious name

Just as Mata Hari’s real name was Margaretha Geertruida Zelle MacLeod, Zouzou didn’t start life as Zouzou. Her real name was Aziza Faris. Zouzou is an affectionate form of Aziza. It only needed a slight adjustment for Faris to become Paris* when she became a film star and decided to give herself some French mystique.

Give her a tragic past

Zouzou’s parents died in a car crash when she was eighteen. A friend of her father took her under his wing. “A peculiar variety of friend,” she said darkly, describing how the man had helped her into the film industry, where she became a plaything of his business friends. “It was sordid and exciting at the same time. The attention of rich men made me the envy of my fans. But while they envied me, they hated me too. It is the fate of women like me.”

Give her an ambiguous morality

Although she was known in Egypt as ‘the national bitch’, Zouzou’s lascivious reputation concealed a different morality. She remained a virgin until she was thirty-three. “A man may gorge on mango when all he has been given is boiled carrot,” she says, explaining how she tricked the old men.

Give her a quirky view of the world

Zouzou has spent her life negotiating deception and lies. “My whole life was a bargain.” Her instinct is to protect herself through obfuscation: “Why tell the truth when an untruth will suffice?” she often says.

Give her a distinctive speech style

Zouzou’s first language is Arabic, although we learn that she also speaks French and Turkish and probably other languages. When she speaks English, I give her a stilted and slightly florid style, e.g. “I had to go to many parties on yachts in Beirut … So many actresses, so many men with creeping hands. You see, sister, I cannot think of a yacht without remembering the caresses of those old fellows.”

*For Arabic speakers: Yes, yes, I l know this is cheating and that the vowels in Faaris and Baariis are different!  Let’s keep it bayni wa baynkum! 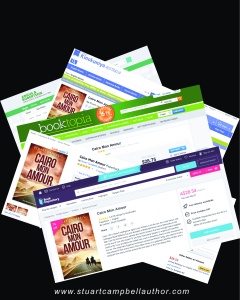 I’m delighted to announce that my publisher is now distributing paperbacks in Australia. You can order Cairo Mon Amour online at the retailers below. The really good news is that you pay local freight rather than copping a big postage bill from the UK! 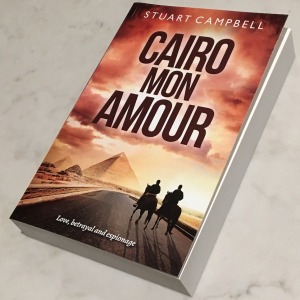 I’m giving away two signed copies of Cairo Mon Amour in March 2018 to Australian residents only. Simply tell me in the LEAVE A REPLY box  below the name of the cafe Pierre visited on the first page of the novel (hint – check out this link and hit the ‘Look inside’ arrow). The first two correct answers get the freebies! I’ll contact the winners privately to get their Australian postal addresses.

After Goodreads giveaways in November, December and January 2018, word is spreading about my espionage romance Cairo Mon Amour. In total, 2597 people entered the giveaways, and 547 have the book on their ‘to read’ list.

I’m planning more giveaways this year, but if you want to skip the line, just click here to find out how to buy a copy.

Sincere thanks to publisher Austin Macauley for organising the December and January giveaways.

Cairo Mon Amour started out as a noir novel. Whether it ended up as one, you can be the judge. But in the noir tradition, I needed a femme fatale, and that’s why I created Zouzou Paris.

She’s the childhood sweetheart of Pierre Farag, my Armenian-Egyptian private eye. But they’ve been long separated. The sweet girl he knew as a teenager on holidays in Alexandria is now a notorious film actress, protected by powerful men.

But she’s in danger, fearing that a high-ranking official wants her murdered. And that’s how she and Pierre meet again after nearly twenty years – she summons him to her private apartment to ask for his help. He sits agog as she levers off her luxuriant wig, peels off her eyelashes and wipes away the make-up: She’s no longer the hard-bitten Zouzou Paris, but the girl he knew as Aziza Faris, who fluttered her eyelashes at Pierre in their teens.

Well, with a reunion like that, how could I hold back? They’re bound together for life. But first I have to get them out of Egypt. I put them on the last ship to leave Alexandria when the Yom Kippur war breaks out, and then I follow them through France, where they are married – a condition that Zouzou imposes before she will allow Pierre into her bed. There’s a curious reason for her stipulation on wedlock, but you’ll have to read the book to know what it is.

We leave them in exile in 1970s London, both trying to negotiate a city of coin-fed gas meters, evil landladies, cambric bedspreads, and Dixon of Dock Green on the TV.

I’m fascinated with Zouzou – her volatility, her odd wisdom, the depth of her loyalty, her resignation to fate. I purposely didn’t give her a point of view; rather than writing from inside her head, I allowed the layers of her character to build through Pierre’s observations. My aim here -and I think it worked – was for Zouzou to be enigmatic and unpredictable.

A final word on her name: Zouzou is an affectionate version of her real name Aziza. But there’s a connection with a a film that was showing in Cairo around the time the novel is set: Khalli baalak min Zouzou, or ‘watch out for Zouzou’. In the movie, Zouzou is a college student who has to work secretly as a belly dancer to make ends meet – the nice girl with a shameful secret. How could I resist calling my femme fatale anything else? And of course, my Zouzou claims to be half-French, although nobody believes it. The surname Paris is her clumsy attempt at European sophistication, and it’s not so distant from her real family name Faris.

You can buy a copy of Cairo Mon Amour here.

Do you suffer from bruxism brought on by poor pirate accents? I do: I grind my teeth whenever I watch the BBC TV show Doc Martin. If you’ve ever watched this program you’ll know that in the English seaside village where the doctor practices, all the locals speak Piratese, or as I sometimes like to call it Yokelese.  But more of Pirate language in a moment.

My real gripe as a finicky linguist is that TV and film so often handle language use so amateurishly. I often get into foetal position and weep when an actor playing an immigrant with poor English is given an inconsistent mishmash of lines where in one utterance they speak in ‘me no understand’ fashion, and in the next produce perfectly formed complex sentences dressed down with a silly foreign accent.

And don’t get me started on those war movies vere ze Chermans spik like zis! Make ‘em speak German and add subtitles, I say. The worst such example of this genre is the (for me) unwatchable Captain Corelli’s Mandolin, in which Nicolas Cage should have got an Oscar for sustained performance of high front vowels and trilled r’s.  Maybe he’d had tuition from an actor I once met at an audition whose résumé included the ability to speak English in twenty-five accents, including both Eastern and Western Armenian.

Arrr! That’s Piratese by the way, for ‘back to the topic’. In Britain and Australia, it is customary for actors playing southern English rural characters to employ a couple of pronunciation tricks such as modifying the ‘o’ sounds in words like ‘coat’ and changing the vowel in ‘eye’ to the vowel in ‘boy’. The principal trick, however is to rhotacise, i.e. (in simple terms) to pronounce most of the r’s indicated by spelling. So, where a Londoner or Sydneysider would not pronounce the ‘r’ in ‘hard’, a speaker of Piratese would pronounce it. Give it a try. If you have young children or grandchildren, you can copy Captain Feathersword of The Wiggles, who speaks quite good Piratese.

So why are my teeth a millimetre shorter than they should be? It’s because of the basic mistakes that Piratese speakers make. Why do I keep hearing actors saying things like “Hello GrandmaR” and “Where’s LouisaR?” where no ‘r’ exists in the spelling? Well, the reason is that they overdo a little rule that allows us non-rhotic speakers to pop in an ‘r’ when the next word starts with a vowel. So, while we don’t say the ‘r’ in ‘Here’s my car’, we can say it in ‘My caR is in the next street’.

OK, all clear so far. However, the brains and mouths of native Londoners and Sydneysiders wickedly conspire to play the ‘India office’ trick on us. Try saying this phrase quickly and not making an ‘r’ at the end of ‘India’.  No ‘r’ in the spelling – we just overextend the ‘caR Is’ rule to ease the transition between the last vowel in ‘India’ and the first vowel in ‘office’. Try it: IndiaRoffice.

Arr! What bad Piratese speakers do is push the rule too hard by sticking the ‘r’ on the end of words that end in a vowel but are not followed by a vowel: While it’s fine to say ‘GrandmaR isn’t here’, it’s a plank-walking offence to say ‘Here’s GrandmaR’.

If I can be shamelessly unscientific for a moment, we non-rhotics are like carriers of damaged linguistic DNA; a few centuries ago all English speakers pronounced all their r’s, until the effete London court gave them up and the fashion spread through the hot chocolate drinking classes. But not all our telomeres were degraded, and the vestigial ‘r’ still pops up here and there in the attenuated fin de siècle speech of Camden Town and Bondi.

I’m astonished that few people I’ve spoken to seem to notice these errant r’s, or, when the mistake is pointed out, care. But I do, which is, I suppose one of the burdens that we sad scholars of linguistics carry. For years I’ve struggled to answer the question ‘what’s the use of linguistics’ at cocktail parties, and I’m beginning to think that it’s to keep dentists in business.

Now, if I’ve sparked your interest in linguistics, have a look at my latest novel Cairo Mon Amour, which has no pirates in it whatsoever and actually has nothing to do with linguistics