Do you suffer from bruxism brought on by poor pirate accents? I do: I grind my teeth whenever I watch the BBC TV show Doc Martin. If you’ve ever watched this program you’ll know that in the English seaside village where the doctor practices, all the locals speak Piratese, or as I sometimes like to call it Yokelese.  But more of Pirate language in a moment.

My real gripe as a finicky linguist is that TV and film so often handle language use so amateurishly. I often get into foetal position and weep when an actor playing an immigrant with poor English is given an inconsistent mishmash of lines where in one utterance they speak in ‘me no understand’ fashion, and in the next produce perfectly formed complex sentences dressed down with a silly foreign accent.

And don’t get me started on those war movies vere ze Chermans spik like zis! Make ‘em speak German and add subtitles, I say. The worst such example of this genre is the (for me) unwatchable Captain Corelli’s Mandolin, in which Nicolas Cage should have got an Oscar for sustained performance of high front vowels and trilled r’s.  Maybe he’d had tuition from an actor I once met at an audition whose résumé included the ability to speak English in twenty-five accents, including both Eastern and Western Armenian.

Arrr! That’s Piratese by the way, for ‘back to the topic’. In Britain and Australia, it is customary for actors playing southern English rural characters to employ a couple of pronunciation tricks such as modifying the ‘o’ sounds in words like ‘coat’ and changing the vowel in ‘eye’ to the vowel in ‘boy’. The principal trick, however is to rhotacise, i.e. (in simple terms) to pronounce most of the r’s indicated by spelling. So, where a Londoner or Sydneysider would not pronounce the ‘r’ in ‘hard’, a speaker of Piratese would pronounce it. Give it a try. If you have young children or grandchildren, you can copy Captain Feathersword of The Wiggles, who speaks quite good Piratese.

So why are my teeth a millimetre shorter than they should be? It’s because of the basic mistakes that Piratese speakers make. Why do I keep hearing actors saying things like “Hello GrandmaR” and “Where’s LouisaR?” where no ‘r’ exists in the spelling? Well, the reason is that they overdo a little rule that allows us non-rhotic speakers to pop in an ‘r’ when the next word starts with a vowel. So, while we don’t say the ‘r’ in ‘Here’s my car’, we can say it in ‘My caR is in the next street’.

OK, all clear so far. However, the brains and mouths of native Londoners and Sydneysiders wickedly conspire to play the ‘India office’ trick on us. Try saying this phrase quickly and not making an ‘r’ at the end of ‘India’.  No ‘r’ in the spelling – we just overextend the ‘caR Is’ rule to ease the transition between the last vowel in ‘India’ and the first vowel in ‘office’. Try it: IndiaRoffice.

Arr! What bad Piratese speakers do is push the rule too hard by sticking the ‘r’ on the end of words that end in a vowel but are not followed by a vowel: While it’s fine to say ‘GrandmaR isn’t here’, it’s a plank-walking offence to say ‘Here’s GrandmaR’.

If I can be shamelessly unscientific for a moment, we non-rhotics are like carriers of damaged linguistic DNA; a few centuries ago all English speakers pronounced all their r’s, until the effete London court gave them up and the fashion spread through the hot chocolate drinking classes. But not all our telomeres were degraded, and the vestigial ‘r’ still pops up here and there in the attenuated fin de siècle speech of Camden Town and Bondi.

I’m astonished that few people I’ve spoken to seem to notice these errant r’s, or, when the mistake is pointed out, care. But I do, which is, I suppose one of the burdens that we sad scholars of linguistics carry. For years I’ve struggled to answer the question ‘what’s the use of linguistics’ at cocktail parties, and I’m beginning to think that it’s to keep dentists in business.

Now, if I’ve sparked your interest in linguistics, have a look at my latest novel The True History of Jude, which has no pirates in it whatsoever.

This blog is usually reserved for things related to books, but being  a a big fan of New South Wales TAFE* and having a soft spot for designers, I couldn’t help spreading the news about the talented design graduates coming out of the Design Centre Enmore. Below is an extract from the TAFE press release:

The event’s big win went to Jason Pante, who was not only winner in his category, but went on to be named ‘Australasian Graduate of the Year’.

You can read the press release in full here.

Why a soft spot for designers? It’s probably the way they bridge technology and aesthetics, whether they are of the graphic, interior, fashion, industrial or some other variety. And it’s also that designing things is so hard. That’s why we have design degrees. I’ve done DIY designs for book interiors, websites  and house extensions, and they always look, well … unprofessional at best, and crappy at worst.

Why am I a fan of TAFE NSW*?  Primarily because TAFE NSW has given countless thousands of people their career start in hundreds of trades and professions. I doubt whether there’s a person in Sydney who doesn’t have a family member with a TAFE qualification.  And it gave me my start in education. Long before I became a university Pro-Vice Chancellor, I spent six years as a TAFE teacher working in  the exquisite colonial  Building A in Mary Ann Street, Ultimo. By a strange quirk of fate, my old office is sometime used for meetings of the TAFE NSW HE Academic Board, of which I am now a member – the same Board that recommends the approval of the degrees at the Design Centre Enmore.

*For my non-Australian readers, NSW is New South Wales. TAFE used to stand for Technical and Further Education.

My new novel Cairo Mon Amour will be released in July 2017 by Austin Macauley Publishers, an independent publisher with headquarters in London and New York. You can learn more here.

Professor Martin F. Mooney is a fading poster boy of the inner-city elites: Left-leaning, middle-aged and too frisky with his female students, he’s looking for a way out of the university before he’s pushed. Politics seems the obvious next step. This contemporary satire set in Sydney, Australia is your perfect literary companion in the Trump-Brexit era.

Three pieces of news in recent weeks convince me that scholarship is being devalued faster than last year’s smart phone. The first was the

claim that hate sites are gaming Google so that mundane searches return results that reflect right-wing extremist views. The second was that the Australian senator who flabbergasted the noted physicist Professor Brian Cox with his climate change denialism is to travel to the US to confer with President-Elect Trump’s advisors. And the third was an Australian cabinet minister who declined to express confidence in the government’s own Chief Scientist.

Perhaps the news about Google is the most distressing. Forget the extremist views: The crucial point is that the more we click on a specific topic, the more our supposedly neutral social media tools will feed similar stuff back at us until we are drowning in a pool of our own distilled personal opinion. Worse still, despite the teaching of critical literacy in our schools, the internet seems to have gained the authority of the encyclopedias we used to have on our shelves.

Remember that encyclopedias contained curated knowledge based on scholarship; social media contain knowledge curated by popular opinion and algorithms. I am constantly staggered by the recycling of discredited pseudo-knowledge through sharing, tagging, liking, and emoticonning. This way lies designer barbarism.

My career as academic was based on the notion that knowledge was built on the foundations laid down by the scholars who preceded me. The crucial tool was falsificationism – the technique by which you stress-test existing knowledge with the aim of disproving its validity or improving on it. You gather evidence. You evaluate it. You weigh up competing models. You make the best-informed conclusion that you can. That’s why we have cancer drugs, mass transport, clean water, and of course the internet.

And that’s why stunts like sideswiping our top scientist and claiming that NASA is faking climate data devalue the scholarship that separates us from the barbarians. 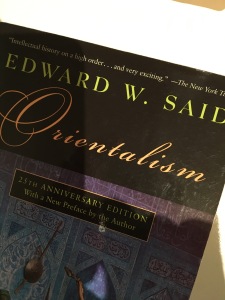 It would be no exaggeration to say that Edward Said has been one of the major influences on my intellectual life. I’ve waited sixteen years to read his 2000 memoir Out of Place, which deals with his early life in Cairo, Palestine and Lebanon, and his education in the US.  Said began the book around the time of his leukemia diagnosis, which he explained as the impetus for the writing of this extraordinarily intimate account of his lifelong sense of dislocation. For me, Out of Place provided a key to understanding the emotional foundation of Orientalism, his entirely unemotional and razor-sharp critique of Western conceptions of the East.

I completed my early degrees in Arabic and Linguistics  just before Said’s  Orientalism  turned on its head the very concept of Oriental Studies, and I’ve spent many years pondering the intellectual upheaval that the book triggered in me. Looking back at my research career and my academic writing,  it is now obvious to me how heavily I was influenced by Said’s work – even if that was not particularly clear to me at the time. His ideas have also never been far from my mind  in my later life move into writing fiction.

I’m especially fascinated by the Cairo chapters in Out of Place given that I lived in Cairo in 1973 and 1974 and have just finished my novel Cairo Mon Amour set in that era.

I’m also struck by Said’s ultra-dry irony. Here’s a delicious example from his description of the stuffy English school he attended in Cairo  in the early fifties (along with Michel Shalhoub, later known as Omar Sharif):

“The incarnation of declining colonial authority was the headmaster, Mr. J. G. E. Price, whose forest of initials symbolized an affectation of pedigree and self-importance I’ve always associated with the British.”

I took time out from writing fiction last year to contribute the introduction to this new book, edited by Associate Professor Mustafa Taibi from Western Sydney University. In writing the introduction I took the opportunity to honour the memory of the Iraqi scholar Dr. Safa Khulusi, whose  Arabic classes I attended at the Polytechnic of Central London in the seventies.

The invitation to write the introduction evoked warm memories of academic colleagues, teachers, and students from the Arab World.

You can read a sample of the book by clicking the  Look Inside button here.