War makes an irresistible setting for fiction, as the never-ending flood of WWII novels and movies shows. Gulf War thrillers are almost a genre in their own right.

The Yom Kippur War has its novels – Herman Wouk and Tom Clancy both weave stories around it. But I wanted to do something different – my novel set during the Yom Kippur War Cairo Mon Amour, is set in Egypt – not Israel.

I felt especially well qualified to write this book: I was a student at Cairo University when the war broke out in October 1973, and I had a ringside seat – or sometimes a seat under the kitchen table when the air-raid sirens went off.

If you can’t remember the main points about this particular conflict, Egypt invaded Sinai to reclaim land lost to Israel in 1967, and Syria attacked the Golan Heights. The conequences of the war included the 1978 Camp David Accords and the final withdrawal of Israel from Sinai in 1982.

What compelled me to write this book was the extraordinary lengths that Egypt went to in concealing the date of the attack. How did President Sadat keep preparations for a massive ground and air attack secret? And how could I spin a story of espionage and romance around this?

Details have emerged in memoirs and works of research: Hospital wards in Cairo were emptied under the pretext of epidemics in anticipation of floods of wounded troops; a military sports carnival was scheduled for the day of the attack; false stories were planted about the attack date. When I did my research, I found so many events that I could dramatise: The sudden evacuation of Soviet families just days before the outbreak of war; the last ship to leave Alexandria, crowded with Americans desperate to get away.

I also wanted to write a very human story, so I created a handful of flawed characters who all have a personal stake in finding out – or concealing – the date when the attack will be launched. We have a Cairo private eye of mixed Armenian and Coptic background; his childhood sweetheart who is now a notorious actress; a Soviet diplomat with divided loyalties; and two British spies who happen to be former lovers.

I made a decision to stick closely to the historical record: The chapters in the first part of the book follow exactly the days just before and after the start of the war. When the Soviet diplomat Zlotnik, drunk in his flat, hears the rumble of the huge Soviet aircraft flying in armaments, it is real; I heard them on that very night myself.

And I tried to capture the day-to-day atmosphere in the streets of Cairo, when, as a British student taking Arabic courses at Cairo University, I found myself in the midst of a populace that swung between elation at the first flush of victory, and distress as  the wounded began to stagger home.

An earlier version of the blog article appeared under the title  ‘The Middle East conflict that inspired Cairo Mon Amour’.

Why not sign up for my twice-yearly newsletter and get a free short story The Unmasking of Mr. French.

When I was studying  Russian in Moscow in 1974, it was unthinkable that in  less that twenty years, the Soviet Union and the Warsaw Pact would be no more.

For my literary invention Ivan Zlotnik, the flawed Soviet diplomat in Cairo Mon Amour, the USSR was there to stay. Zlotnik gambled his freedom on the date of the outbreak of the Yom Kippur war. Did he win or lose? That’s for the reader to judge.

Forty-three years later, tourists buy up Communist kitsch in nostalgic homage to regimes whose harsh outlines soften over the decades. But more permanent traces of the Soviet era remain, as this small gallery shows:

Writers are getting more foul-mouthed

The recent Guardian article on the increasing rates of foul language in literature got me thinking about my own use of the f-word and its derivatives.

I checked my f-quotient in my last three novels and – yes, my language is getting fouler with every book, rising from a demure 0.012 f*cks per hundred words in my first novel to 0.031 f*cks per 100 in Cairo Mon Amour, my latest.

Confession time: I spent my early years on a council estate just outside London, and I Iearned to handle the f-word like an East End fishmonger. Later I became part of the Australian intelligentsia, and honed my skills so that I could out-f*ck any Professor of English Literature in the room.

Here are the results drawn from the 26 f*cks in Cairo Mon Amour:

Bellamy said, “If we’re right about this we’re finished when those f*ckers from Ealing work out that they’ve put us together.”

“How come you talk like a barrow boy sometimes? I remember that from Shemlan. It’s quite a turn on, you know!”

2.  Here’s a similar example, where I contrast the restrained and courteous Pierre with a thug:

“Take it back,” Pierre hissed.

3. And here’s Pierre learning to swear in English:

“Well, sort of gallop like f*cking hell. We’re being shot at.”

4. In this example my Soviet diplomat Zlotnik is supposed to be speaking in Russian, and the f*ck is a translation of the common Russian curse:

“Where’s that f*ck-your-mother Englishwoman gone?” Zlotnik rarely cursed. It had all unravelled, all gone to shit. He sank into the sofa.

5.  In this last example, I have a bunch of American diplomats fleeing Egypt on ship. There has been a stream of f*cks as they lose their cool. Here’s the last one:

As the Cynthia’s engines groaned rheumatically into life, an American in a suit and a baseball cap pointed at the Soviet ship and shouted, “Look, they’re unloading f*cking missiles!”

I’m actually very pleased with my self-diagnosis: Every example has been strategically selected. There’s not a gratuitous f*ck in the book. Obviously, I was well trained!

Let me know what you think!

This beautiful book cover for Cairo Mon Amour has an interesting evolution. It was actually designed for a self-published edition of the book, but I offered the artwork to my publisher, who was happy to take it over.

When I first discussed the project with my designer Rachel Ainge of Tribe Creative Co, I imagined a cover that tried to tell the story. I cooked up the idea of an aerial shot of Cairo with a pair of women’s shoes (containing feet) on the ledge of a building.

Rachel took things in hand: “Don’t try to tell the story.  Leave it with me.” We’d had this discussion before when I’d talked her into creating covers that told the stories of two other books of mine. They were lovely covers, but did they help to sell books? I wasn’t sure. Here they are, along with one of my crude sketches:

Rachel came back to me with the idea of branding the three books under a common theme, including new covers for the older books, and a new title for one of them.

Over to me for the theme. I thought hard about what linked the three books: A contemporary  Australian political satire, a psychological drama set in England, and a thriller/romance set during the Yom Kippur War. How were they connected?

It came to me in a flash while I was walking on the beach (that’s where my most creative thinking takes place): Love, betrayal and redemption. That’s what I really write about.

This gave me a formula for uniform subtitles for the three books:

Next, Rachel asked me for an iconic scene for each book. “I’ll give you the blockbuster treatment – a big dramatic sky and characters looking into their destiny,” she said. I came up with Martin Mooney looking at the distant mountains, Jack Walsingham approaching a rural cottage, and Pierre Farag and Mark Bellamy riding towards the Pyramids.  This is what I got: 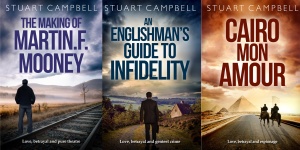 And I’m very happy with the result!

Cairo Mon Amour will be published in late June 2017 by Austin Macauley Publishers, an independent trade publisher with headquarters in London and New York. 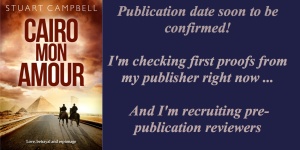 Click to see my latest newsletter. If you want to receive this newsletter by email, please click here. I’m pleased to announce that my novel ‘Cairo Mon Amour’ has been accepted for publication in 2017 by an international publisher, thanks to the great work of my agent Michael Cybulski and the team at New Authors Collective. Many thanks to those who have supported my efforts in bringing ‘Cairo Mon Amour’ to this point. I’ll be keeping my readers up to date with details of the release date as they come to hand.